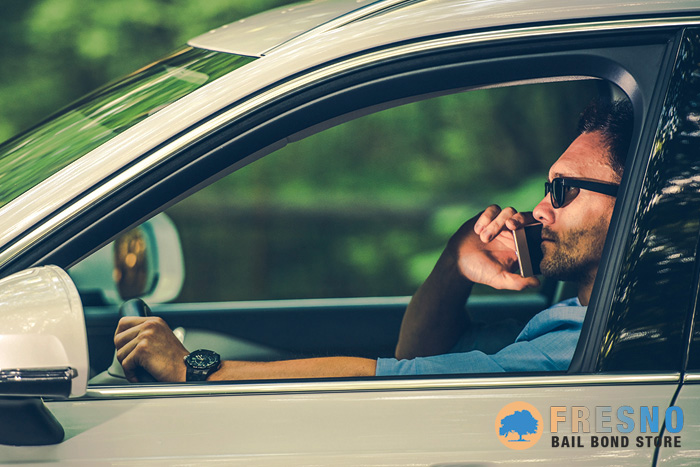 The most common traffic citation issued in California is for speeding. Going just a few miles over the speed limit is all the justification a police officer needs to pull you over.

If the road has a higher posted speed limit, you’re allowed to drive that fast. An example of this is the freeways that are posted at 70 miles per hour.

It’s important to remember that if driving conditions are less than desirable, a police officer can pull you over and issue you a speeding citation even if you’re going the posted speed. The reason for this is because you’re supposed to adjust your speed for the road conditions. That means, if there’s dense fog and your driving 55 on a two-lane undivided highway, a police officer could issue you a speeding ticket and claim that you were driving too fast for the current conditions.

Using A Cell Phone While Driving

It doesn’t matter if you’re talking, taking a picture or sending a quick text, if a California police officer sees you using your cell phone while you’re driving, they will likely issue you a citation. The only way you can use your phone while driving is if it’s set up in a way that doesn’t require you to use your hands at the same time. The National Highway Traffic Safety Administration considers using a cell phone while you’re behind the wheel the leading cause of distracted driving incidents. Considering that 3,142 people lost their lives in distracted driving incidents in 2019 it’s not surprising that California has created expensive cell phones and driving tickets.

The first time you’re ticketed for driving and using a cell phone, the ticket will cost you $148. Each ticket you get for the same violation after that will cost $256.

It seems like a pretty simple concept. When the traffic light turns red or you come to a stop sign, you stop the vehicle. Yet, failure to stop at lights and stop signs is one of the most commonly issued traffic citations in California.

What gets most drivers into trouble isn’t that they totally ignore the stop, but rather that instead of coming to a complete halt, they do what is called a rolling stop and then go through the intersection as soon as they see that there aren’t any cars coming. Many drivers don’t even realize that they haven’t stopped completely.

The best way to avoid getting a failure to come to a complete stop ticket is by making sure you remain at the stop sign for a full five seconds before continuing your journey.

Tailgating other drivers is a major problem in California, in large part because there is so much traffic. Tailgating is driving directly behind the car in front of you without giving yourself an adequate amount of space to avoid trouble if the lead car suddenly breaks.

The problem with tailgating is that not only does it increase the odds of you getting into an accident, but it can also make the driver of the car you’re tailgating nervous, causing them to make a mistake that leads to an accident.

If you’re pulled over for tailgating, the ticket and associated court costs will come to $238.00.

In all fairness, reckless driving is a catchall phrase that covers a variety of issues. Most police officers will issue a reckless driving ticket whenever they feel you’ve done something that could have created an accident.

Not only are the fines connected to all of these California traffic citations steep, but you could also see your car insurance premiums increase after you’ve been issued a ticket. The good news is that as long as you drive defensively and use good judgment, you shouldn’t have to worry about getting ticketed.